On the last weekend of June I joined Cat's family for a trip to Cedar Point. Catherine, her brother Matt, Matt's girlfriend Mal, and I drove east from Chicago while her mother Ann, her sister Liz and Liz's friend Aurora, drove west from Rochester. We arrived at almost the same time in lovely Sandusky Ohio, where Catherine had booked us a cabin on the grounds of the amusement park.

Cedar Point claimed (continuously, on signs throughout the park) that it was the "Best Amusement Park in the World". Apparently this stems from an annual competition in the industry newsletter Amusement Today, which has awarded it that title 16 times in 16 years. They also claimed to have the "World's Best Sports Bar", a claim that I find dubious. Certainly as far as Roller Coasters, it is incredibly competitive internationally. More to the point, it was a hell of a lot of fun!

We made the, perhaps questionable, decision to do the rides in reverse order of terror and began with the second-craziest roller coaster of them all, the Millennium Force (more on the first-craziest one below). This is one of only four "Giga Coasters" in the world, and was the first to be constructed. It's 310 feet tall and drops down at 93 miles per hour. I did not enjoy the experience (although I must say I'm pretty proud to have done it, in retrospect). 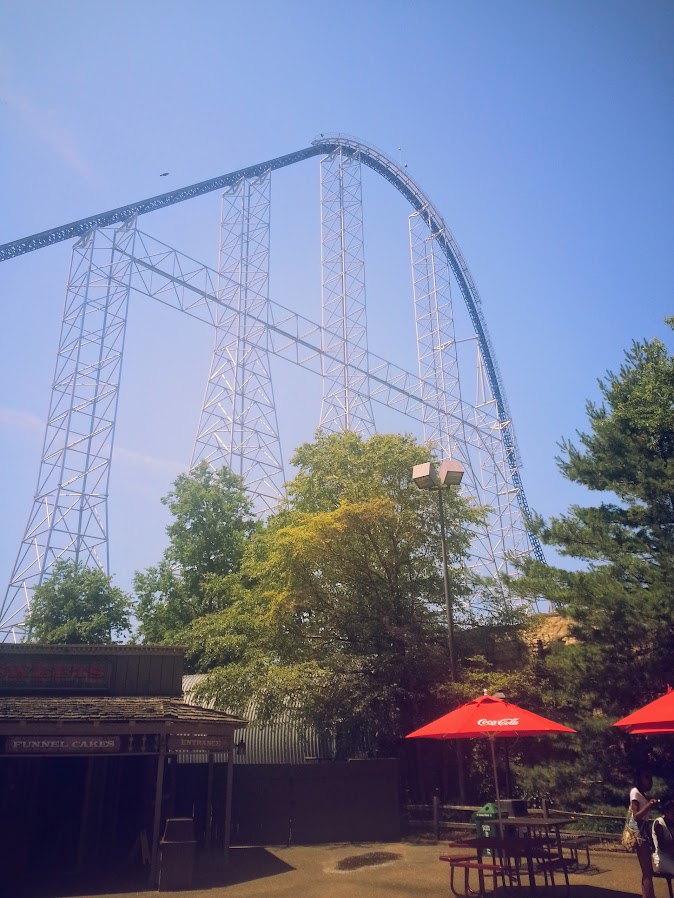 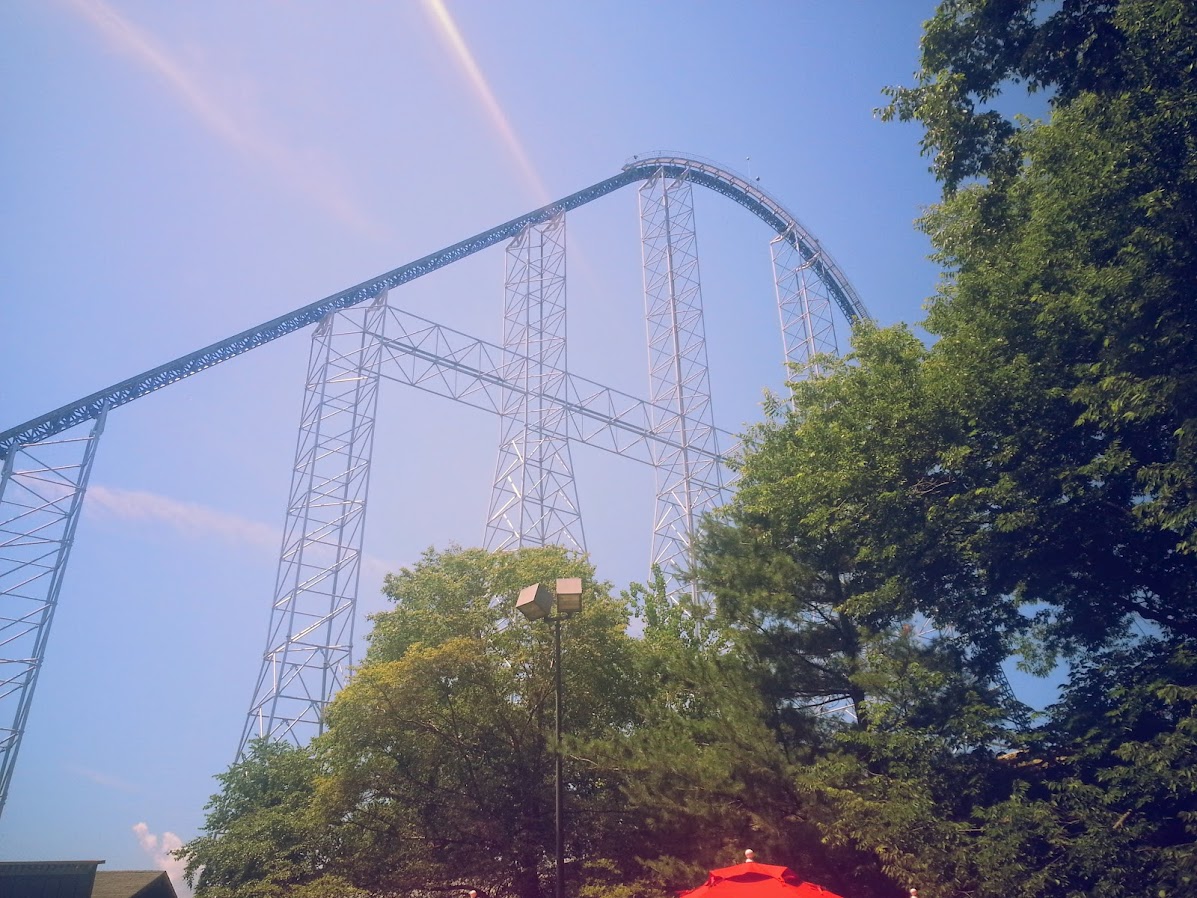 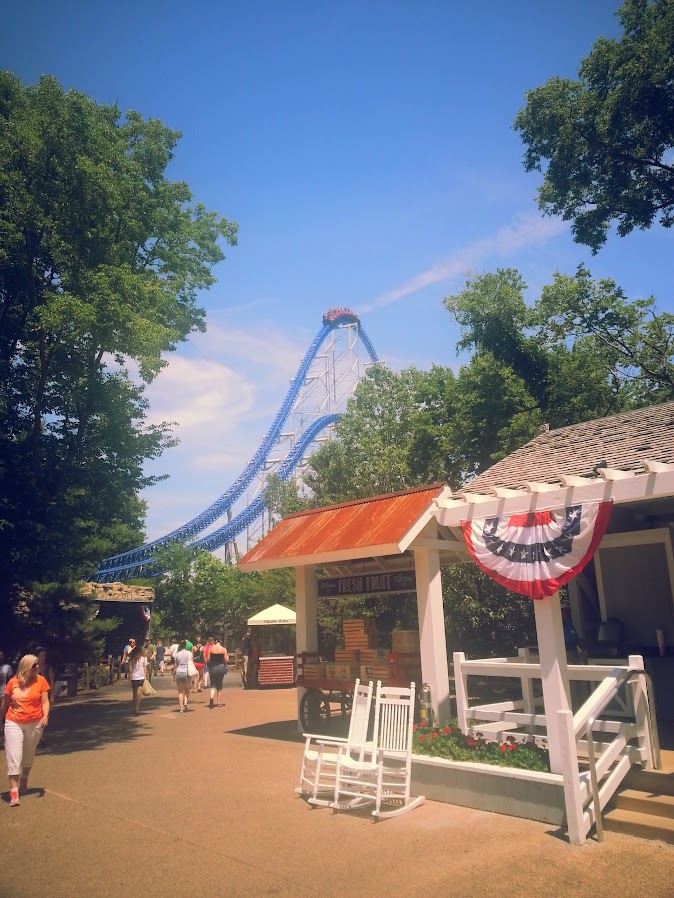 The benefit of doing that one first was that it really did make every other ride seem tame by comparison. When we did the Mantis next (where you stand for the whole ride, and flip upside down twice) it was a comfort to know that it was only traveling at 60 mph. The downside was that I hadn't been on a roller coaster in almost two decades, and I wasn't at all sure that I actually enjoyed them. Standing on the Mantis did nothing to change this doubt.

Fortunately, we did the Corkscrew after that. It goes pretty fast (48mph) flips over and does two corkscrews straight through the midway, but it didn't feel nearly as out of control and terrifying as the other two. In fact, it felt great! That day we also did the Raptor, where you are underneath the track with your feet hanging free. Catherine loved it, but I didn't enjoy it as much--possibly because we had to wait in line for over half an hour in the hot sun.

We also rode the Magnum, the roller coaster that started the "roller coaster wars" in the early 90s. It was ten years older than the Millennium Force, and so it couldn't drop as far or go as fast, which meant that I enjoyed it more. Still, at 72mph it was a bit much for me. Especially that first 200 foot drop. -shudder- Still, it did provide a sufficiently exciting photo for me to pay for a copy: 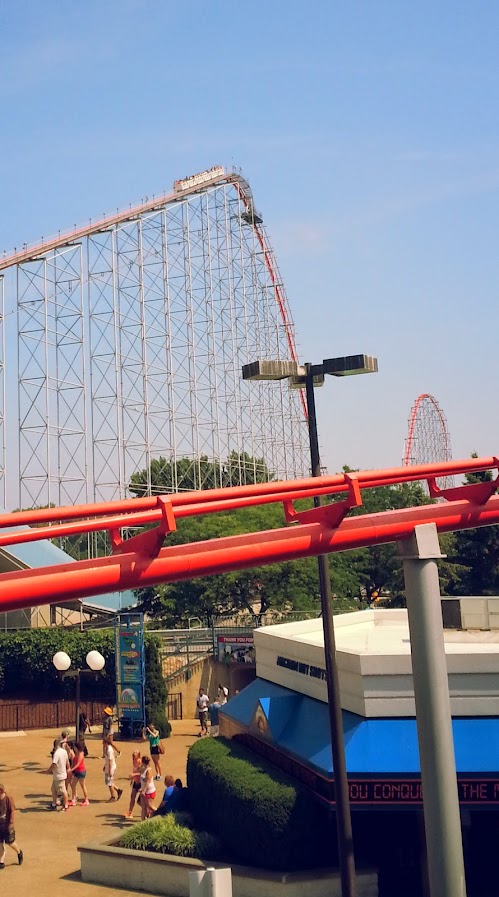 We went back to the cabin for lunch--and right there we probably saved the cost of accommodations, just from avoiding the over-priced midway food--and a few hours later, we went to check out the Water park. There were a number of neat slides that were just barely worth waiting in line for, but two of the attractions really stood out. The first was "Eerie Falls", a water slide through a completely enclosed tube. Looking at it from the top, after standing in a fairly brief line, it was pitch black and surprisingly warm--a bit like a cave, or the mouth of some very patient creature. Inside of the tube it was too dark to read.

My inner-tube and I went through a series of twists and turns at a surprisingly quick speed, all in pitch darkness. Every so often, however, there were gaps in the top of the tube to allow daylight and, often, waterfalls. In other sections there were scatterings of tiny holes, like view glimpses of the stars as I flew past. In retrospect, it looked a lot like that scene from the Matrix.

The other ride that I loved--also a favorite of Catherine's--was the "Renegade River". Basically it was just a long river, with a steady current pushing you are your inner-tube along it. At various points there were waterfalls and rain machines. It wasn't a "thrill ride", by a long shot, just an incredibly pleasant experience. On the second day Catherine and I drifted through the whole river three times though, holding hands most of the way.

In general our second day was much the same as our first, but with different roller coasters. The first one of the day was far and away my favorite coaster in the park (and also their newest), the Gatekeeper! It was a "wing" coaster, where the seats are on either side of the track (as opposed to directly above it, on a traditional ride) and it was also one that left your feet free to dangle--there was no floor under the seats. It went at 67 mph, flipped upside down several times, had a corkscrew turn or two, and also dived back and forth through these giant columns, and it was amazingly fun! Partially this was because at that point I had done enough coasters that I was feel more at ease, and partially it was because it was brand new--some of the older rides were really quite jerky. Perfectly safe, of course, but they didn't feel safe the way the Gatekeeper did. And part of it was because Catherine started pretending that the coaster was actually a plucky Winchester courier rolling and diving through Napoleon's anti-aircraft barrage to deliver a vital message to Admiral Roland. We also took a break from the adrenaline to ride a couple log flume rides (we all got gloriously soaked!) and to take a lovely jaunt in some classic cars. 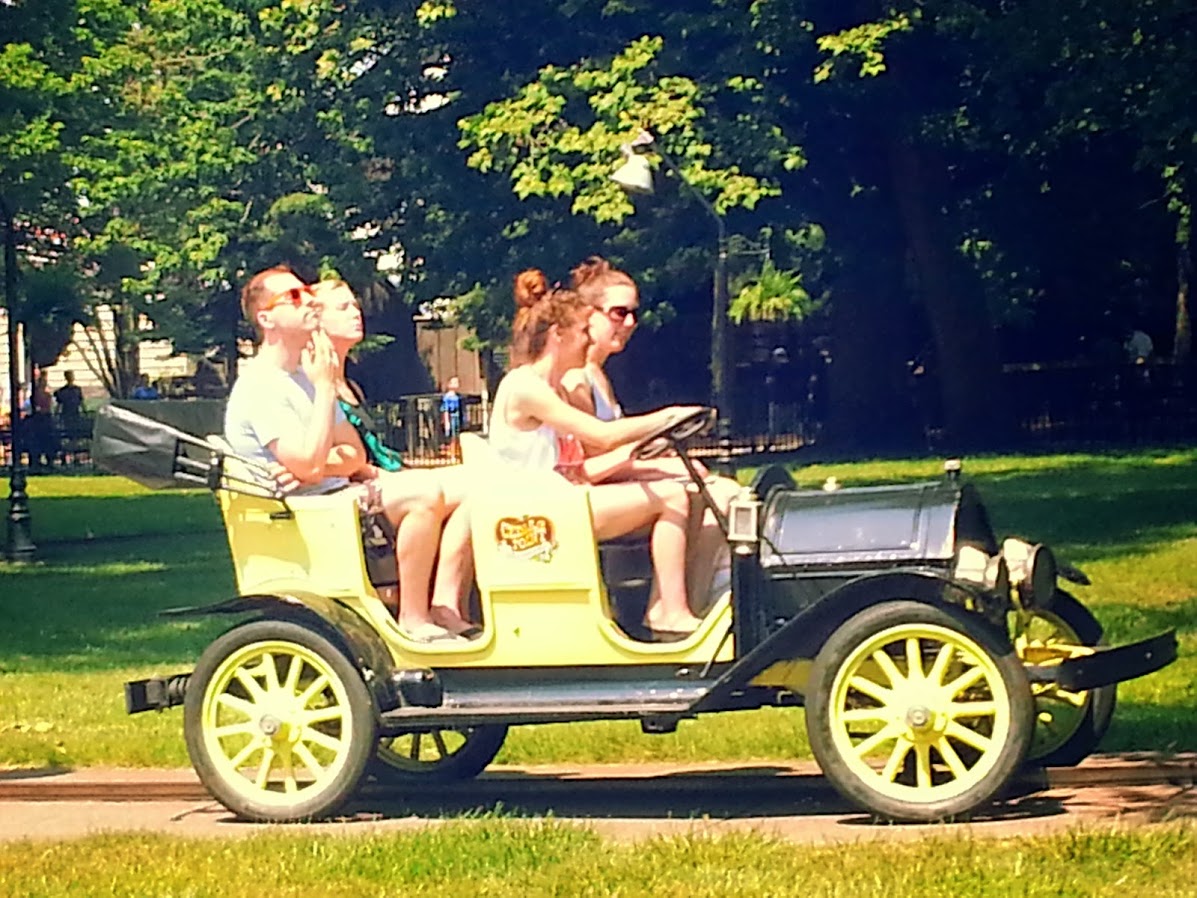 We went back to the water park after lunch, but the lines were much longer (it was a Saturday and not a Friday, after all) so we mostly just floated down the Renegade River for hours. I got sunburned, but not as badly as you might expect! I never did find out what it was that the river rejected with such vehemence, however.

That night we went back to the coasters. I declined to ride the Magnum again (it was far more pleasant to sit on a bench and chat to Catherine) and sadly the line at the Top Thrill Dragster was too long for any of us to wait.

I say "any of us", but by that point I knew that there was no way on earth I was going on the thing, but I really wanted someone to ride it! This was the coaster that made me classify the Millennium Force as only the "second-craziest". The whole ride lasts 17 seconds (I have read), because all it is is a car getting accelerated to 120 miles per hour, slamming up 420 feet in the air, and crashing back down again at a literal 90 degree angle. When we first saw it, Ann suggested that the architect had designed a more sane roller coaster, but they didn't have room for it so they'd just squished it in to fit. It is just ridiculous. 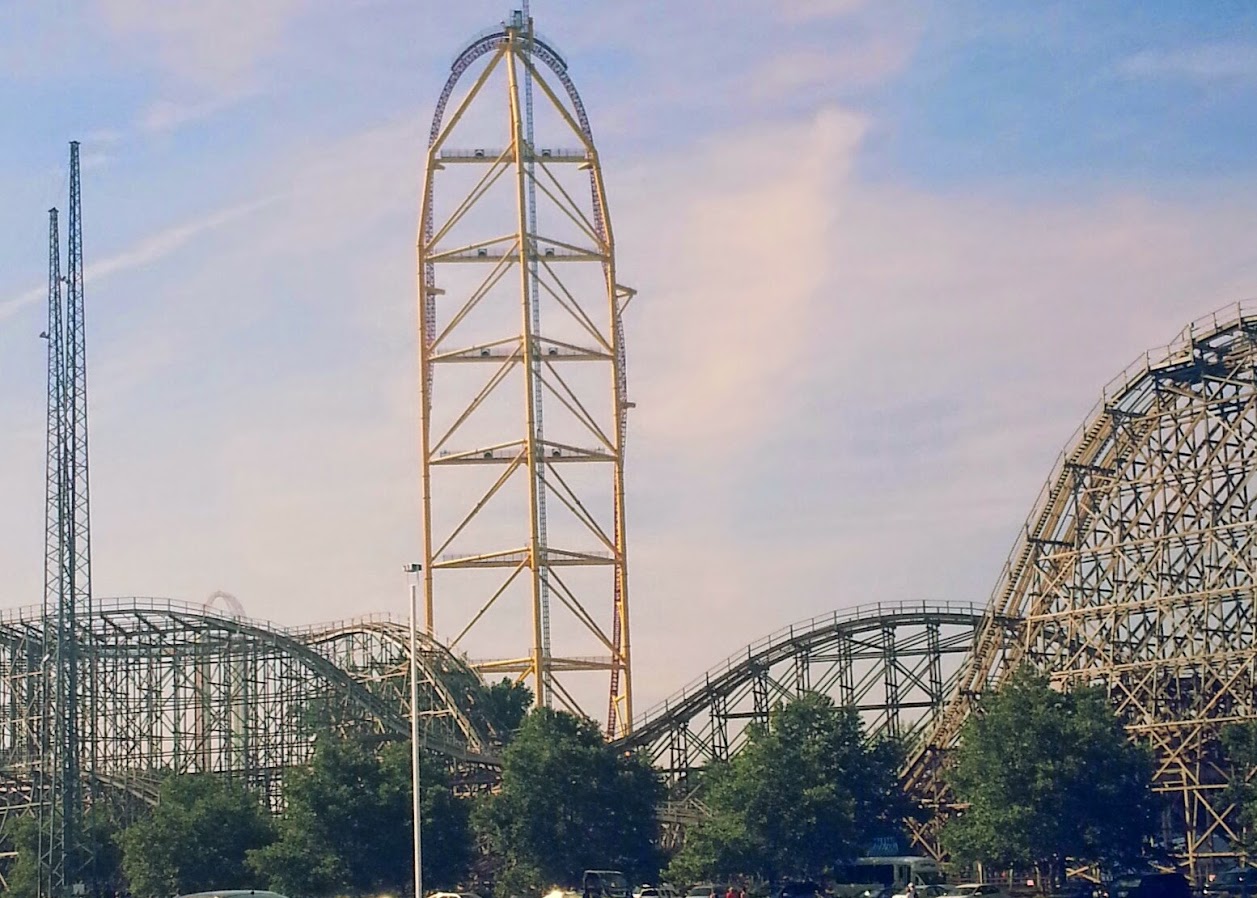 Finally, after the sun set we went on the Power Tower. This is actually two rides--one that lifts you 240 feet straight up at 50 miles per hour before slowly lowering you back down, and one that slowly raises you up before the 240 foot fall. It's worth noting that the fall is actually accelerated (so it's faster than free fall would have been), and you feel -1 G of force.

These two photos were taken by Ann the first time we did it, on that Friday: 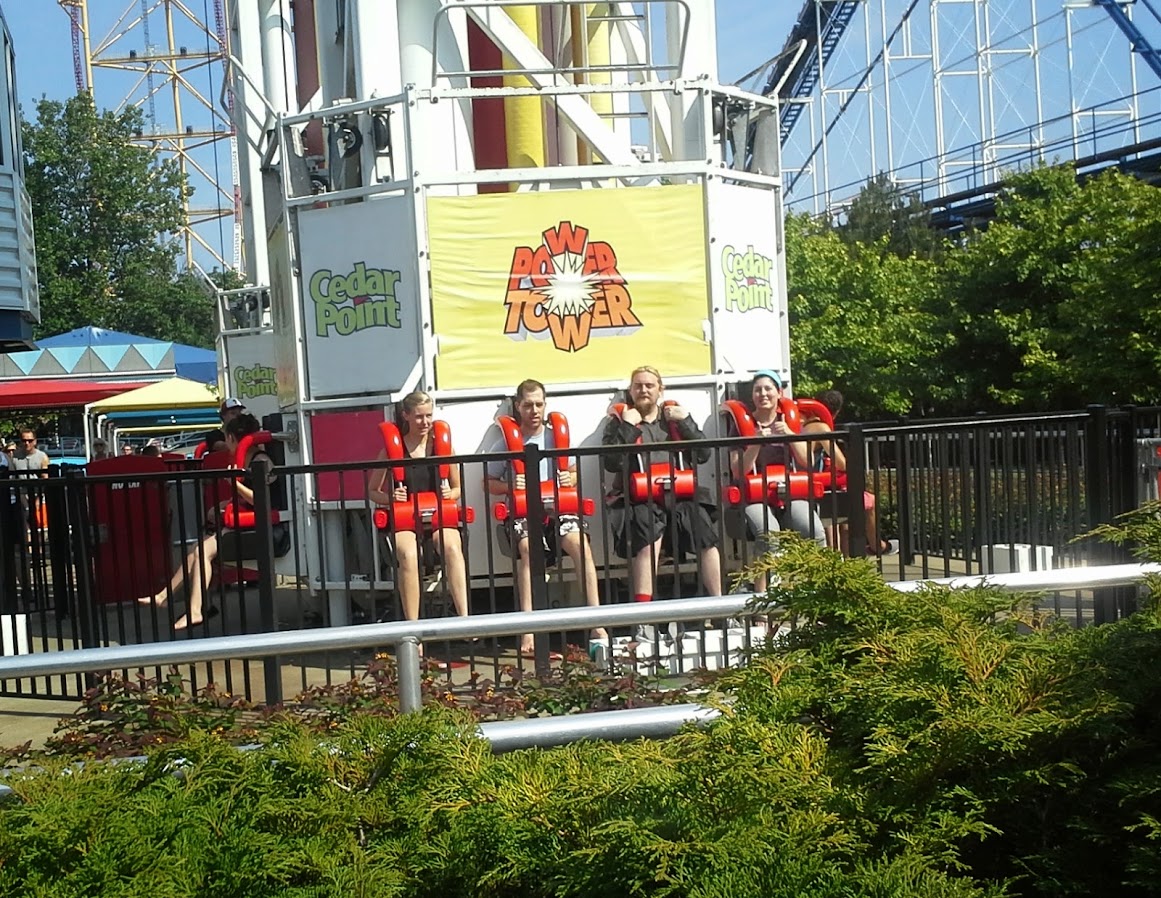 And this was taken by Liz on Saturday night--I feel it more fully captures the experience: 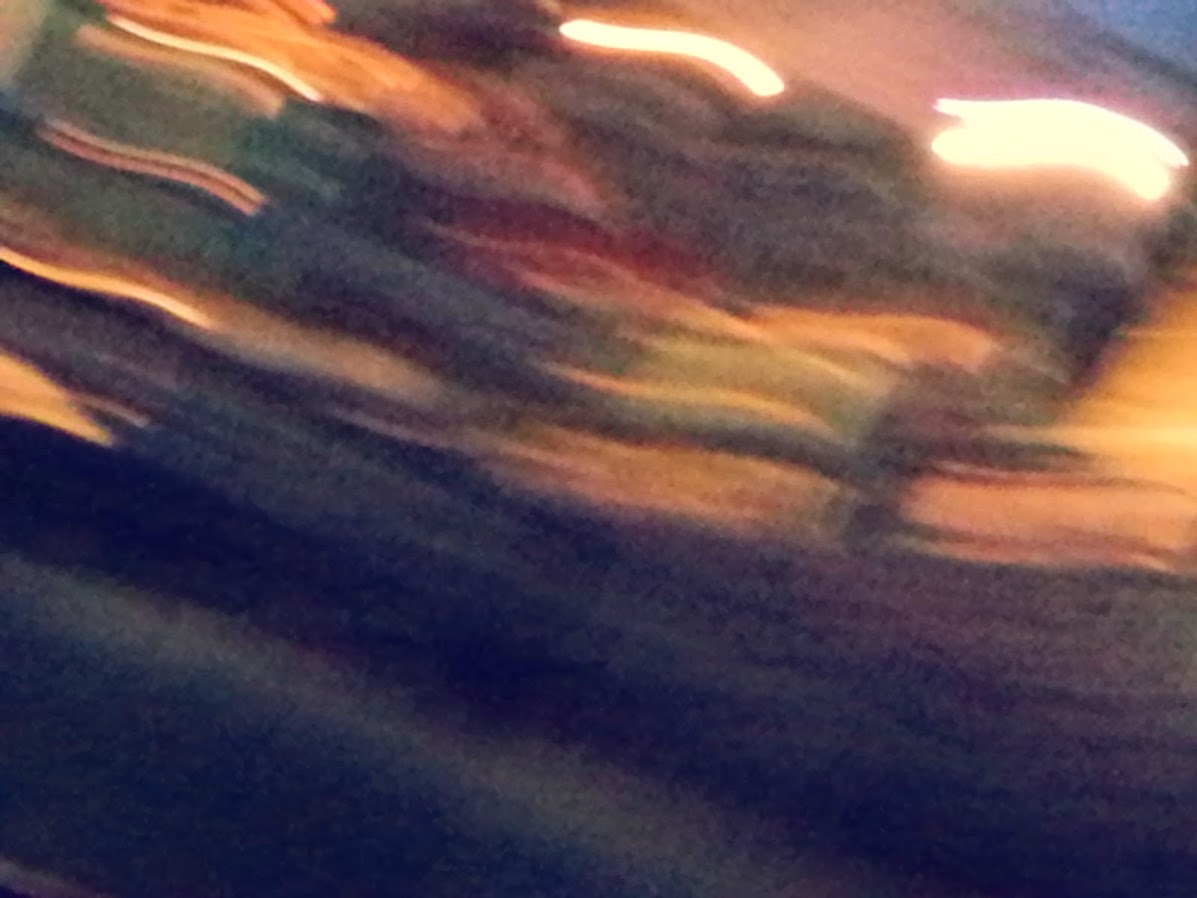 Inexplicably there was no line for this ride (I suppose a mere 240 foot drop isn't worth the wait, these days), so we did both rides. They were terrifying, and they were wonderful, and the view from the top (with all the lights of the park shining below us) was extraordinary.