This year there were two Temples at burning man. The big Temple, as always, was a place for meditation on change and loss. People left gifts and wrote remembrances on the walls in sharpies, and on Sunday it was burned. I'll say more about it in a bit.

The other Temple, the new one this year, was the Temple of Shame. Sadly I don't have any photographs of it (but Michael Holden does, see above). It was a giant ramp, twisting in on itself like a spiral. All along the walls, the railings, and the floor people had used sharpies to write about shame. Shame as a concept, antidotes to shame and, most importantly, things that shamed them in their lives, things that they were trying to come to terms with. For many, this was the first place they had ever publicly (if anonymously) acknowledged it.
As usual in Black Rock City, there was a great mix of the commonplace ("I'm ashamed that I live so well, when others in the world live so poorly") the weird ("I'm ashed of how bad horses smell. Fuck they reek!") the smart-arsed ("I'm ashamed of wasting this sharpie!") and the heart-breaking ("I'm ashamed of passing my abuse on to my nephew"). It was incredibly moving, and I saw a number of visitors in tears, a few of them sobbing uncontrollably. On Saturday night a few hours after the Man was burned they burned the Temple of Shame in a smaller ceremony.

The other temple, the big Temple, was the Temple of Transition. It was truly amazing--I still prefer the emply from my first year (it struck me as a little more humble, and more focused on the contributions of the participants) but there's no denying that this year's was quite wonderful. The folks that built it have full info on their website.
It consisted of a main building, a single room twenty feet across and 130 feet high ("The Temple of Transition"), surrounded by five smaller rooms. 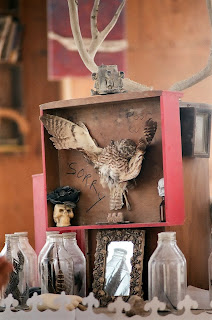 The Temple complex as a whole was covered with fantastic carvings of theme-appropriate artwork. They were gorgeous, but also made of unpainted plywood--they were intended to be written on. By Saturday, almost every square inch of the Temple was covered in people's memories, dreams, and memorials. Again, these ranged from the heartbreaking to the whimsical. This was one of my favorite ones: 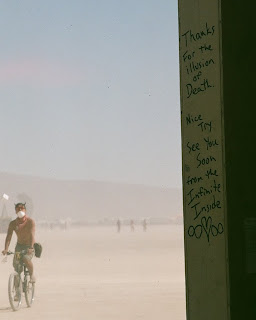 And here are a few of the carvings, click on them to see larger versions: 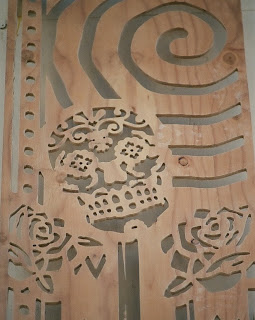 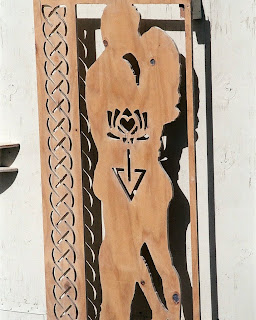 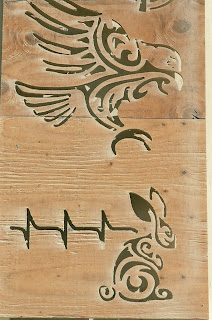 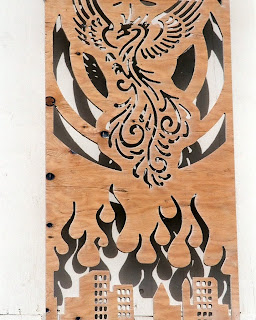 In addition to the carvings, the Temple was also festooned with gargoyles: 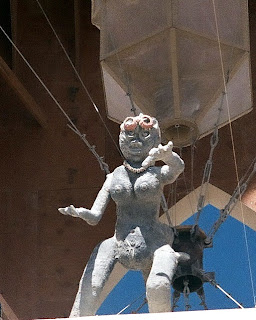 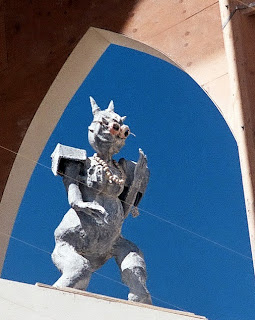 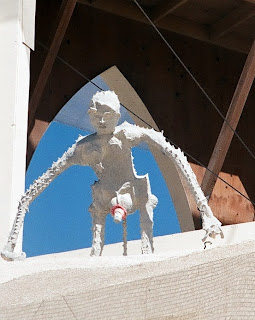 Finally, there was a large, open courtyard on the center-facing side, where a sixth side-temple might have gone. I noticed at the time that there were a number of wires strong across it, high in the air, but simply assumed that they were guy wires for extra stability. The thing was over 130 feet tall, after all! I found out later that they were actually the strings of an enormous harp. I never got a chance to hear it played, but it must have been amazing!

Which brings me to the music, and the most incredible part of the Temple: the central spire. It was a vast, open room--the only ceiling was a hundred feet up--and in addition to the writing that covered the walls, they were also covered in gamelan. Gamelan music is from Indonesia, and is made with an ensemble of players striking gongs and bells (it can also include other instruments, but it's mainly the gongs that people think of when the think of gamelan). 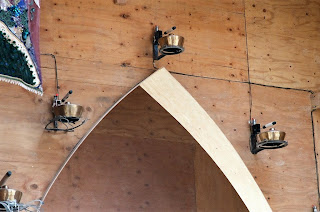 In this case each gong (and there were forty or fifty, spread throughout the central room) was being played by a robotic striker, controlled by a computer program. At times a human would take control, but most of the time it ran on its own. I was never able to figure out whether it was a pre-programmed composition or an aleatoric one, but it was beautiful. Gamelan music is played in a non-Western key, giving it an eerie quality that is also highly conducive (at least in the case of this particular performance) to meditation. 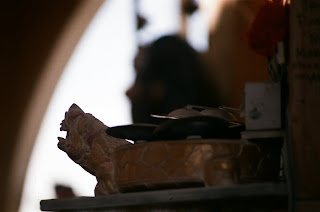 And, indeed, the main room of the temple was packed with tranced-out people. Every time I went there was no room to lie on the ground, and little space to sit along the walls--people were praying, meditating, relaxing or simply sleeping there. Eventually a few folks would get up and move along, and someone else would take there place. The Temple has always been a peaceful place, each year I've gone, but the continual chime of the gamelan music made this year's Temple especially soothing. As always, it was burned to the ground in a solemn ceremony on Sunday night. This year, sadly, I had to miss the event. 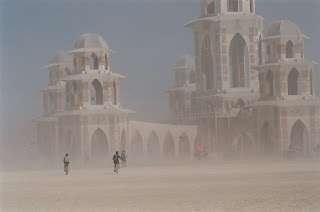 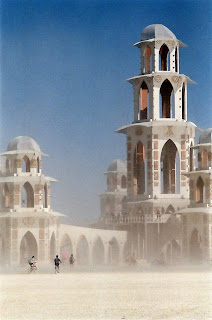 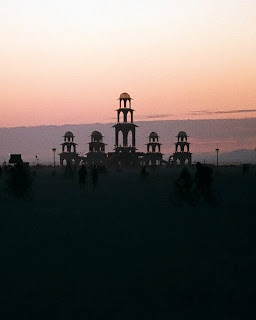