Everything You Know About the Preconditioned
Counterproposal

Catherine helped me pick out her engagement ring, a beautiful puzzle ring with a sapphire stone from Nelly Van Cleeff, and it finally arrived from Canada on Saturday. 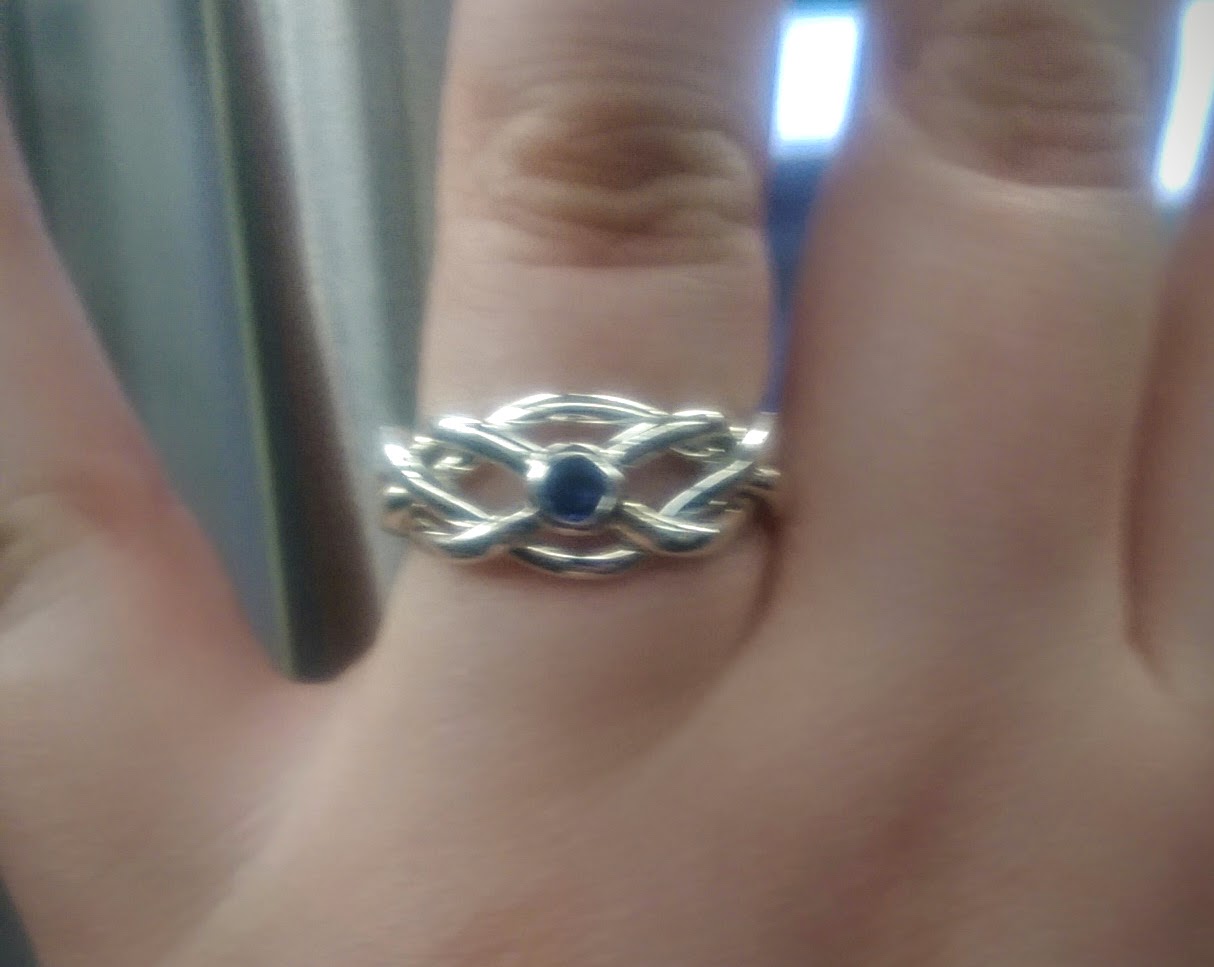 Catherine had made it clear that she wanted me to do more than simply hand her the box and glare at her (which is apparently how other members of her family have gotten engaged!) and so I had been working on something to say for a couple weeks. We called it my "counterproposal", although of course I had already happily accepted her original proposal.

The difficulty for me in making this sort of love pledge is that I'm deeply distrustful of the sorts of things that people traditionally say. "I'll love you until the stars burn out" isn't actually a statement about anything real, it's just a lovely sentiment. I remember the first time I read Byron's line, "Henceforth I breathe but for thy sake, thou shalt be all in all to me", thinking that it was so lovely... and then realizing that it was just an apology for almost shooting her to death while drunk. And then I read a second poem, equally beautiful, pledging eternal love to a different woman altogether.

Anyway, I was worried that the end result was rather dry (if thoroughly falsifiable!). I think it came out ok, however, and both of us got quite choked up while I read it to her. Catherine told me that I could post it here:

There are many, many qualities that I love about you, that make me honored and ecstatic to be your partner. But here I will concentrate on three virtues alone: Competence, Bravery, Joy.

Competence may seem like an odd way to start a eulogy--the term itself might sound like damnably faint praise, and anyway it's hardly one of the Great Romantic Virtues. Byron never composed a sonnet around it, and it isn't one of the nine Muses. But as you know, I am deeply suspicious of Romance.

Competence, when I use the term, is far more than mere adequacy. It might be closer to the mark to call it Grace--but that has theological implications that I would rather avoid here. To me, to say that someone possesses competence is to say that they are utterly reliable, completely dependable, a rock solid foundation with which one may Get Things Done. Competent people know the Right Way to do things, they follow Best Practices, and they learn from Past Mistakes. (Its hard not to read this in a Ron Swanson voice).

Everyone has their specializations, they niches; you know that so-and-so is good at making an egg salad sandwich, say, or fixing a vacuum cleaner motor. But with someone who possesses the attribute of Competence, one can walk up to them and ask them to perform any task whatsoever. They'll either know how to do it already, figure out how to get it done correctly, or tell you right upfront that that's not something they can do. It's a wonderful thing, and you have it in spades.

It may be that Stage Management is a particularly well-developed niche for you, but dressmaking hardly is and you are solid in that area as well. From skills as complicated as omigarumi or sous vide cooking, to those as seemingly straightforward as injecting insulin into a cat I know that I can rely on you to do things Well.

Bravery, as has been noted ad infinitum through the ages, is more about doing the right thing in spite of one's fear than it is about not feeling the fear in the first place. When discussing bravery, it is traditional to note that for this reason, someone who is unafraid cannot, therefore, be brave. Another interest corollary is that it's difficult to know whether one is brave oneself. Someone can tell if they are fearful or not, but anything more than that is hard to quantify.

And I am here to tell you, beyond a doubt, that you are brave.

It took me a while to realize quite the scope of your courage, but I think it first started to hit me when I thought about the details of your move to Chicago. Both of us have had the experience of dropping out of our regular lives and suddenly moving from New York to Chicago. But for you it was a much more calculated, conscious decision. You did your homework, and knew full well the dangers. It worked out ok in the end for both of us, but I was foolhardy--you were brave. Over time, I have learned that this is your approach to many daring things in life, from vacation plans to grad school--do your homework, make the decision, and then to fully commit yourself.

All of which runs the risk of painting a pretty dull picture of you as a details-obsessed berserker, the Heroic Accountant or something, and while I cant say that I dont find the image intriguing, the third quality that I want to honor is your joy, the delightful undercurrent of what is more than mere Whimsy (although that is a wonderful part of it). One of the first things I learned about you was that you were a fan of a hilarious and deeply weird television show about rock stars in high school, and that you and Robin could quote from it endlessly. Not long afterwards, of course, I learned that the television show existed only in shared conversations--the most elaborate in-joke Ive ever experienced.

You are funny and fae and delightful mad, in the best millinery sense of the word. You have a glee for the inexplicably weird and the absurdly adorable in life. You speculate on the hidden back-stories of our cats and you are fascinated by the foreign drama of Eurovision. You frickin' like things, in a world that remains confused by the difference between cynicism and sophistication.

I hope its clear how well I understand that no one is always brave, eternally joyous, or the best at everything. I love you when everything is at its bleakest, when you have confidence in nothing that you do, and when you are too frightened to leave the house. I know that these are all true qualities that also make up who you are, and I love you utterly inclusively of them. But these dark traits do not define you. Far from it. And the three that I concentrate on here are quite common in you, and they strengthen each other in their combined growth. It takes courage to be silly, and its easier to be adventurous if you can handle yourself well.

You are also generous and beautiful, but that is a topic outside the scope of this piece.

+Currently Reading / Just Read
Wow, I seem to have stopped updating this...
+Projects I'm in the middle of
+Previous Posts
+Archives